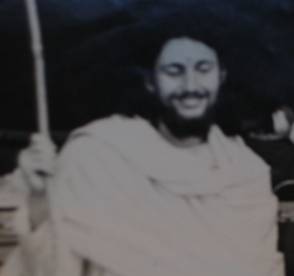 In the universally bad press that Prem Rawat and everything about him got during and after Millenium '73 ("the most holy and significant event in the history of mankind" according to Prem Rawat then calling himself Guru Maharaj Ji) there was one person who got some good press, believe it or not! It was indeed the only Western mahatma, Mahatma Saphlanand aka Brian Kitt!

The local stations were the worst, calling Millenium '73 the biggest hustle to hit the Astrodome since that recent visit by Bobby Riggs (a teniis player famous for his hustles including promoting a match with Billy Jean King). But the national press really wasn't far behind, bristling with questions, concerned only with costs and the chain of organization, refusing to "feel the Knowledge".

And so, on the final day of Millenium, a special Knowledge session was arranged for interested reporters. At least, that's what they thought. For, as it developed, it was not a full-fledged session but a preliminary satsang, where a mahatma tests the sincerity of those wishing to be initiated into the four techniques of meditation.

After the confusion of the preceding three days, it was an inviting opportunity, if nothing else an opportunity to unwind. Mahatma Saphlanand Ji, Maharaj Ji's only Western apostle, drew the circle close around him.

Speaking softly, smiling, charming in his own contentment, sometimes shaking his head in inexpressible bliss, sometimes clasping the hands of premies present, really getting off, the mahatma resembled Kathryn Kuhlman [Christian evangelist], ever-so-transported when contemplating the wondrous ways of the Lord.

The media, the mahatma said, really was capable of marvelous things. The media had the power to spread the name of Maharaj Ji. He talked like an understanding father, always comforting, always supportive.

But would he explain the four techniques of meditation, please? Because, really now, they were fast becoming an open secret.

Wasn't it true that to see the light you merely closed your eyes and pressed upon the eyelids? That to hear the music, you stuck your thumbs into your ears? That to taste the nectar you curled your tongue back toward your throat and savored your own saliva?

The mahatma would not comment. For the techniques are empty ritual unless you are ready to experience the Knowledge, and only the mahatma can determine when that time has come.

The reporters were once again stymied.

They would not understand Maharaj Ji's words until they had experienced the Knowledge.

But they would not be allowed to experience the Knowledge until they had demonstrated a belief in Maharaj Ji's words.

It had begun to sound like a cosmic Catch 22

"Can't we have a Knowledge session, now?" a woman pleaded, sincere in her desire to go on to receive the Knowledge.

The mahatma's calming smile momentarily froze. "We must not rush, he insisted. There will be time tomorrow, you will be asked to fill out forms, everything must pass through proper channels."

The ex-Mahatma remembers (in 2008) being roped in to provide a cheery and sympathetic face and a British accent to the reporters but apparently there was never any plan to reveal the techniques to the journalists.