Jiva was a rock band with a much harder sound than most of the "premie" musicians and they were signed to George Harrison's vanity label Dark Horse records. Whether this was purely done on a musical basis or because Harrison was in the process of courting and marrying Olivia Arias who was a premie at the time is unknown. I still enjoy their music 35 years after deciding that their guru that they sing about is shiite.

Jiva were a band signed to George Harrison's Darkhorse label. The featured Gary Wright (yes Dreamweaver Gary Wright) on keyboards and dropped a 10 song lp back in 1976.
This alone would not land them in the WWIS Krsna Rock series, it is their connection to Indian Guru Maharaji that lands them here. I previously reviewed a record by the band Blue Aquarius-also followers of Guru Maharaji. Even though they are not followers of Prabupadha, I feel they've earned a spot in the KR series.
Now for the music "soulful,white funk rock" is a likely description if you ever see it for sale. To me I was hearing pretty typical 70s California colonic-rock. Slight Framptony feel to the vocals. Side one went by with very little catching my ear. Side 2 opens up with "World of Love" which was much more memorable. They keep a funky disco rock groove going on the next track. They kind of dabble in the Steely Dan type of rock. "Don't be Sad" has the bass player stepping up on a catchy tune -something familiar about it, but I can't place it. Sounds like it could have used some steel drums or something. "All is Well" seems to bear the George Harrison influence the heaviest-sounds like something Paul McCartney might have sung all right. Another way to say that could be, "the last song on the record sounded like a cut rate ham handed stab at 'let it be'". If this band could have come up with some compelling hooks or chorus, they might not have been lost to the cutout bins.
I couldn't end this review without commenting on the cover. I think the pudgy dude on the right is a little uncomfortable next to his hunky waif bandmates. I cannot stand musicians who appear shoeless on their record covers. Millions of people could potentially buy your record and you can't even fucking put shoes on? What is wrong with you? I guess these guys should get a pass since they look like they are in some Utah salt flat or something. 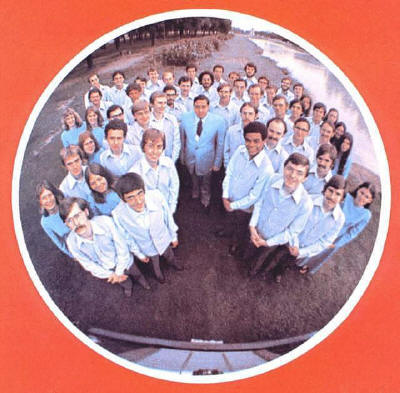 In my search for Krishna rock records I stumbled on this Blue Aquarius LP which is a real odd ball on the Stax Gospel Truth subsidiary(GTS-2725). Calling itself "the new sound of free music". Clearly a peaceful anti-Vietnam 70s vibe on this. Based on the label and the graphics, I expected California Hippies, but I got a large British group in blue suits dedicated to Guru Maharaji Ji. Rolling Stone was apparently hip to the Guru and this article is worth checking out.

I think Dusty Groove got the review right, "The sound of the best tracks is almost in a Hair-type mode -- kind of groovy, with large chorus vocals, and a slight bit of funk in the arrangements. The album sports two great instrumental funky tunes called "Alive & Well" and "Foxfire". I would add a Bee-Gees/G.Harrison vibe as well. "Rock Me Maharaj Ji" is an odd lyric. The song "Arti" that closes side one sounds ripe for a late period Elvis to come chiming in over. "How many lifetimes" opens side two with a soft rock nod to "the red and the black" by BOC(which came out around 1973 so it's possible). Side 2 was apparently recorded live at the Hammersmith Odeon. Dusty Groove is right the 2 instrumentals on side 2 are good. "Foxfire" has a good feedbacky guitar solo. "Alive and Well" is funkier and lets the organ player get some and also lets rip an ill Synthesiser solo. A kind of Afro-Funk groove to it all. "Satguru" brings it home with a HAIR meets Chicago type groove. The "live" side 2 is much better than side one and the 2 instrumentals are head and shoulders above the soft rock guru worship laid out elsewhere on the LP.
A quick google search showed that this was a very musical guru with a connection to George Harrison. Hopefully I can resist the urge to track all these down.