Prem Rawat: The Wannabe Lord of the Skies

Prem Rawat: The Wannabe Lord of the Skies

The young Prem Rawat was obsessed with driving cars and flying planes and was illegally driving cars around in India from an early age. His early Western devotees (circa 1970) reported that blocks of wood were attached to pedals of a car so that he could drive it himself though he could barely see over the bonnet. He enjoys flying so much that it has moved him to poetry (or at any rate to doggerel) and inspired him to get really passionate in his speeches about flying an aeroplane and then follow with lame protestations that really there is nothing as valuable as for example "experiencing the energy that is keeping me alive." One of his lamest excuses for having so much fun flying was that "it was not the airplanes, it was not the flying, that was just an excuse, that was just an excuse." As the Satguru and Perfect Master he was supposed to always be in constant bliss and so when he revealed his real source of enjoyment he would attempt to explain it away. 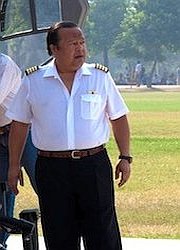 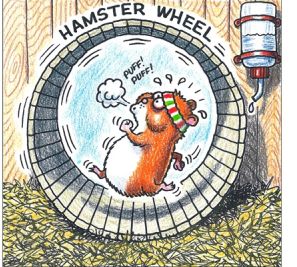 Rawat's demands for luxury and opulence in all aspects of his life might have been enough to keep his organisations' financial resources insufficient to bring "peace to the world" but the cost of buying, leasing and flying his private executive jets have ensured it. The rationale for any organisation to have an executive jet is that the executives can work or rest while travelling but Rawat flies the plane himself, thereby having no time for work and arrives needing rest. The cost/benefit ratio of cost of planes divided by the number of his "students" is extraordinarily high. He was so desperate to learn to fly that began lessons in August 1972 as soon as he had a devotee able to teach him and the necessary funds.

In 1979 it was announced in DLM that funds were required for a "world tour" and that monthly donations should be made for this. In fact, Rawat desperately wanted a Boeing 707 and one was bought and hundreds of premies gathered in Miami to refurbish the plane for free. Rawat's exacting and changing standards for this required more and more money while attempting to keep the project secret. Insufficient research was done and the 707 proved too expensive to run and could not meet the upcoming stringent environmental regulations. Gold plating and polished ebony were part of the interior decoration. In a bizarre twist the 707 was sold to the Maharishi Mahesh Yogi of TM fame, a far richer guru than Guru Maharaj Ji. 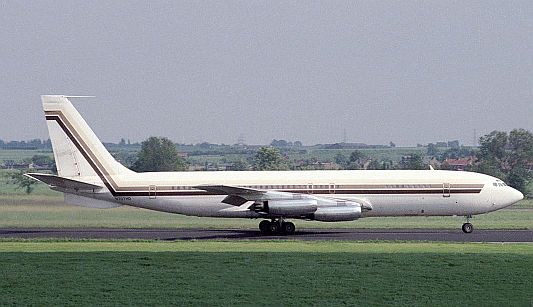 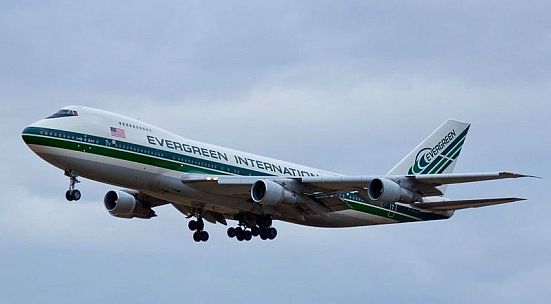 Prem Rawat couldn't care less that the 707 project had cost a fortune in money and his devotees' labour and resources or that the plane proved useless. He was a Jet Captain! He'd proudly worn Top Gun sunglasses. Life doesn't get any better than that. He thinks he looks like Tom Cruise! A short Tom Cruise.

The DECA project was the beginning of the end for Divine Light Mission. Rawat lived in an $8,800 a month island mansion while 1,000 of his most committed premies lived in 4 abandoned, fleabag hotels rented especially for the free cockroach protein available fresh in every bedroom. As the Life Force drained out of the Mission, Rawat began to see the potential in a change. He had a make-over and his ashram premies were fucked-over. What brio, what elan! 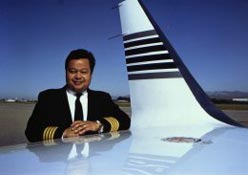 In 1984, a Lear 35 was leased to facilitate Maharaji's world tour. However sufficient research again had not been done and it was not the ideal aircraft for Maharaji. It could fly eastbound around the world (America to Europe to Asia to America) with the help of tail winds but it could not go westbound nor fly from Los Angeles to Hawaii. It's cockpit and cabin were quite small and while Rawat is very short he has always been very fat but at the time it was probably all his followers could afford. 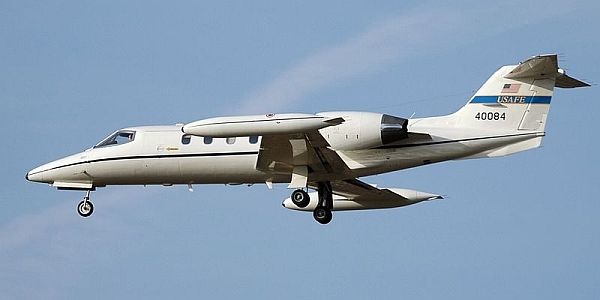 In 1987 Élan Vital purchased a Lear 55 that could be modified to carry long-range fuel tanks that would allow westbound flight around the world, and still have sufficient space for passengers and luggage. It was claimed Maharaji travelled more than 245,000 air miles per year, ie 10 trips around the world? The plane cost $4 million dollars (a loan of $2.5 million was made using his Malibu mansion as collateral) and it was estimated it would cost nearly another $2 million per annum to run. 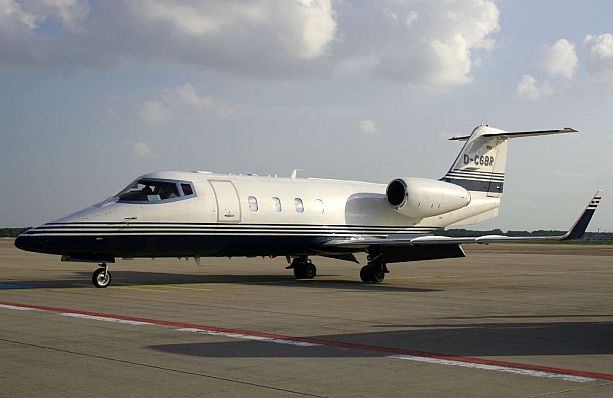 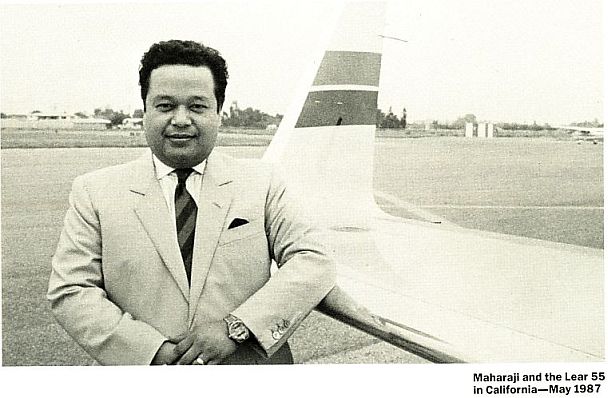 In the 1990s Prem Rawat's obsession with flying aeroplanes was given an incredible boost as financing the lease of very expensive jets became feasible for a cabal of his wealthier devotees thanks to the tax breaks involved in the leasing of areoplanes. Dreams can come true even for a relatively unsuccessful retired Lord of the Universe. He became a Top Gun in a big bad jet.

Videos and DVDs produced by his followers nearly always include scenes of Rawat flying whether appropriate or not. 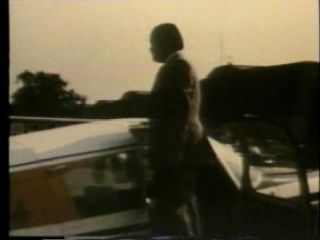 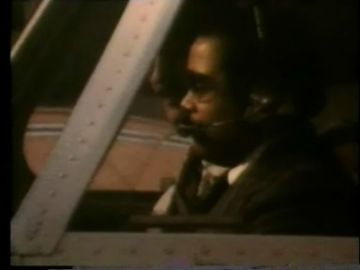 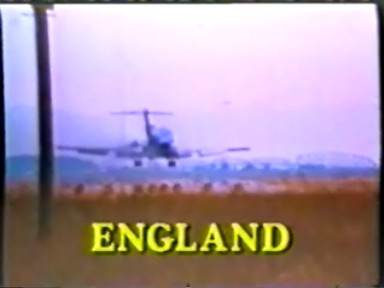 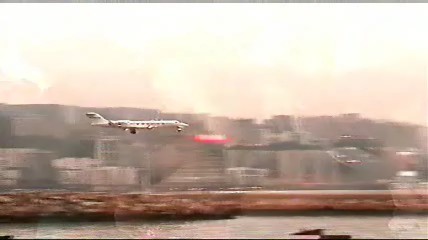 A loving farewell and off for a jaunt in the helicopter with one of the boys. 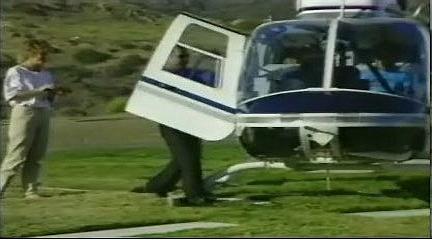 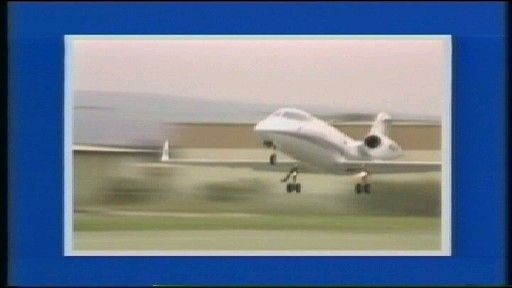 The scene that shows off his latest private jet (1988).

What every Perfect Master needs to get to those hard to reach, out of the way programs and events, a $125,000 glider. 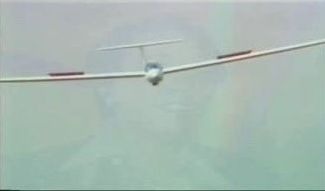 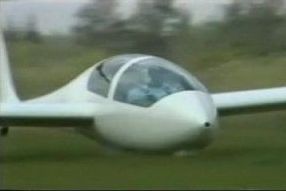 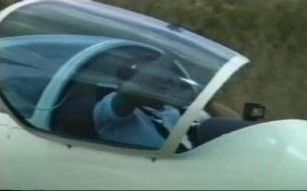